BALLS, STRIKES, & THE POETRY OF THE ABSURD

BEN ADELMAN
October 27, 2004, 11:35 p.m. We’re gathered in the living room with family and friends on my 30th birthday. It’s not the Big Three-Oh that makes this night momentous. We are crowded around the television – standing, not sitting – to watch Keith Foulke close out Game 4 of the World Series against the Cardinals. The score is 3-0 Red Sox.

Albert Pujols knocks a grounder to center for a base hit.

Scott Rolen flies to right for the first out of the ninth.

With one out to go, we lean closer to the tube.

The camera cuts to Sox owner John Henry, literally on the edge of his seat, almost grinning. Almost. He looks like he’s thinking the same thing we are: This is actually happening!

At the plate, Edgar Renteria takes a ball inside. Pujols takes second.

The next pitch crosses the plate high. Renteria slaps it down into the dirt. The ball hops once toward the mound, where Foulke jumps to meet it. The catch is not picture perfect, more of a nervous grab, but the ball is now nestled safely in the pitcher’s glove as the base runner hoofs it toward first. Foulke takes six jogging steps toward the base and tosses underhand to Doug Mientkiewicz.

Mientkiewicz catches the ball, a foot on the bag, with plenty of time to get the out.

For the first time in 86 years, the Red Sox win the World Series.

Mientkiewicz dances off the bag. Jason Varitek, clad for war in catcher’s gear, leaps into Foulke’s waiting arms. Johnny Damon and Manny Ramirez charge in from the outfield. A clump of dancing, sweaty guys grapples and bounces on the mound. The rapturous celebration explodes through the television screen and spills out into our living room, where we, too, jump and roar. Hugs and high-fives.

Abe, 3 months old in his baby seat, begins to wail.

Photo: C. Lee - St. Louis Post-Dispatch
July 2015. A comfortable summer evening at a Little League ball field in Newburyport. I am settled into my folding camping chair just outside the chain-link backstop behind home plate. From this vantage point I have a clear view of the pitcher’s mound, where my son winds up and fires one across the plate for a strike. The boys on the field are miniature versions of the baseball giants we see on TV. They dig in their cleats, bend their knees, and keep their leather gloves at the ready.

This is one of many, many summer ball games, a schedule so unrelenting, it’s amazing there are enough parents willing to sacrifice enough summer time to make the program work. If you think about it logically for just two seconds, the act known as baseball is utterly absurd. Virtue is conferred upon those who can throw a little, white ball quickly and accurately. The ability to whack said ball with a wooden club on a trajectory to where it cannot be retrieved is the definition of “hero.” That’s it. Baseball doesn’t feed the hungry. It doesn’t close the achievement gap, house the homeless, or save the whales. Our culture commits billions of dollars and probably even more hours to the pursuit. For all those resources, though, baseball serves no tangible purpose at all.

And yet watching Abe on the mound, or any pitcher, for that matter, I feel a sort of poetry that transcends the ridiculousness of the sport. On this particular summer evening, my son pauses to gather himself for the next pitch. Somewhere in his glove, his long, pointy fingers settle automatically onto leather and stitches made familiar by years of repetition. He stares in at the catcher’s mitt with tunnel focus. He gathers his lanky limbs into a windup. He pulls the ball out of his glove, and his right arm stretches all the way back, potential energy at its pinnacle. In one smooth motion, Abe slings his arm over the top, steps with his left foot, releases the ball, and follows through with a giant swing of his right leg that twists him nearly 180 degrees. His body operates with the leverage of a catapult. The motion is so smooth and consistent, it looks slow.

The ball is a blur. The pitch seems to be inside, so the batter holds off. As it reaches its destination, the ball inexplicably arcs away from the batter, just crossing the plate through the strike zone. The kid strikes out looking.

I’ve seen enough summer ball games to know this pitch. Abe has a name for it: Eyeballs. What can I say – he’s 11. 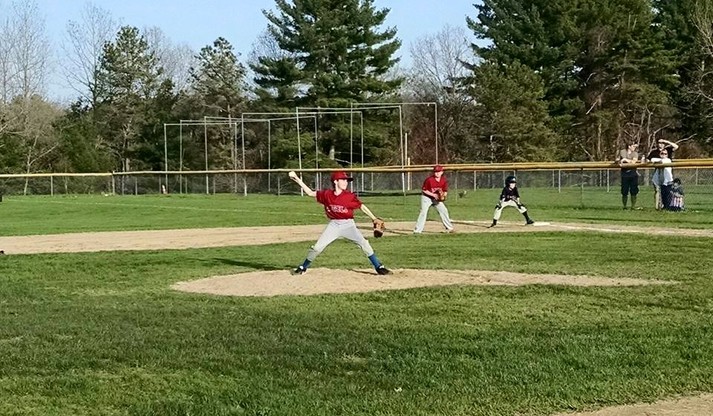 Abe on the mound during a spring ballgame. Photo by the author.
Certainly my love of the game is partly a father’s pride. But there’s more to it. In baseball, success is measured in millimeters and milliseconds. Swing just a little late or a little low and it’s a strike. Time it right and you could win the game with one swing of the bat. Decisions are often reflex. Deliberation occurs before the play, and it accounts for myriad possibilities several steps ahead, like chess. Where the fielders play for one batter may change with the next. A pitch thrown on a 2-1 count might be unwise to throw on a 2-2. Strategy is nuanced. With the best players, it’s instinctive.

When I see all these pieces working together, I feel a kind of poetry, an experience that means beyond its tangible parts. Poetry is that which is felt somewhere beyond its mechanics. It’s an experience that transcends the workings of the logical mind. Some believe it happens in the soul, others the amygdala. I don’t really know. I’ve felt this poetry elsewhere, though: The moment when the sails balloon on a fresh breeze and the boat surges forward, waves trickling past the bow. That is poetry. The line in a song where the singer delivers just the right mix of words and rhythm to drive in a dagger. Poetry. That split-second when the baseball changes trajectory and dives out of the zone just under the slugger’s bat. Poetry.
***
The first time our generation saw the Red Sox win the World Series, there was a collective sense of closure. On a chilly day in late October, our heroes paraded through the streets of Boston like warriors returned from some brutal battlefield victory. Crowds mobbed curbs and bridges. They spilled out of windows and strutted on rooftops. People said that years of pain and suffering were over.

You don’t have to look far past the bandwagon hype, though, to feel the meaning this moment represented.

I sometimes get teary thinking about the late nights leading up to the 2004 World Series. The Sox were down 3 games to 0 against the Yankees in the ALCS. One more loss and the season would be over. But there was a spirit of exuberant resolve – even destiny – on that Sox team. They had long, shaggy hair and silly handshakes. They had talent. They had Big Papi. But most importantly, they believed they could do what had never been done.

We all saw Curt Schilling’s bloody sock performance. The guy actually pitched a Major League baseball game with his tendon sutured into the skin on his ankle. And David Ortiz, grinning wide, swatting fastballs into the seats. The chemistry on that 2004 team was carefully engineered by mad-scientist management that knew it takes more than talent to win. Night after night Boston fans stayed up into the wee hours to watch this unlikely group force yet another playoff game, then another. They walked into work groggy and agape.

Maybe baseball serves no noble purpose. Maybe it doesn’t make sense to pay guys millions of dollars to whack a ball with a stick. And maybe it’s crazy to dedicate hundreds of precious summer hours to a children’s game.

But baseball isn’t about sense, it’s about feeling. It’s about nuance. Baseball is poetry.
Header art by T. Guzzio. Original photo by the author.

Ben Adelman is an English teacher, musician, and former newspaper editor who lives in a small, wooded town north of Boston. He reads DeLillo and DFW and loves folk music and Led Zeppelin. Email him at benadelman@yahoo.com.