paul borst
Music has been a huge part of the 28 years, 7 months, and 14 days that I can remember. Such is life, I suppose when you grow up in a household that includes a father that plays guitar and works at a radio station, and a mother who, despite being tone deaf, sang every song that came on the radio like it was her job.

I started to engage with music on a more personal level when I was really little. My brother and I were tasked with deciding which cassette tape to listen to on family road trips, and I normally picked whichever one my mother suggested (what can I say? I’m not ashamed to have grown up a mama’s boy). So the first band I can recollect listening to was The Moody Blues. To this day, I often find myself listening to The Other Side of Life on my own road trips. 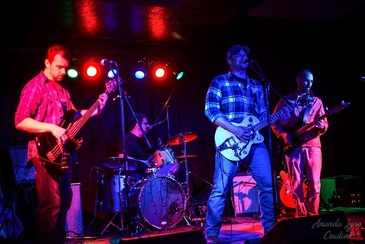 The author stands second from right. Photo: Amanda Lynn Creative.
I found my musical life furthered still on my seventh birthday when I was given my first guitar. It was a hand-me-down Vox electric from my father. I was hooked. But it turns out that playing steel strings can do a number on young, non-calloused fingers, so shortly after that I was given a nylon-string Dixon acoustic with butterflies around the soundhole. I used a guitar learning book to get the basics; how to read music, the notes in the first position on the fretboard, and basic songs such as “Ode to Joy,” “Hot Crossed Buns” and the like. I eventually “graduated” to a more advanced book, and it was at this point I started challenging myself, skipping further in the book to hopefully gain some advanced knowledge, often with poor results.

It’s interesting to note that while some people are taught guitar, and others teach themselves; I learned through a strange combination of the two methods. My father rarely sat down and taught me directly, but I was always present for his guitar lessons with students from around town. Listening to these lessons from the other room, as well as my own insatiable appetite to learn spurred my development. So I can’t discredit for my dad teaching me, nor can I minimize the ability gained through my own desire to learn.

As I grew in skill (however slow it may have seemed to me) I found myself hungry to hear more music, and I listened to anything and everything I could get my hands on. Through my parents' collection, I discovered Gordon Lightfoot, The Doors, Led Zeppelin, and Jimi Hendrix. These artists opened my eyes to everything that music could be. The simple beauty of Gordon Lightfoot, the perfect organized chaos that was The Doors, the joyous intricacies of Led Zeppelin, and the raw unbridled passion of Jimi Hendrix – all of these carried me through my formative years and into high school, where I was fortunate enough to have teachers like Wayne Davison, Helen Demong, Tom Delehant, and later Drew Benware who fostered my growth as a musician and as a person in amazing ways. I spent every free minute of my school day in the small cluster of classrooms that comprised Saranac Lake High School's music department learning the finer points of the saxophone with Mr. Davison, honing my singing with Mrs. Demong, and debating everything from politics to Bach with Mr. Delehant. So much of who I am was developed and encouraged in that place.
I’m not unique when it comes to the part music plays in my life.  I’m sure we could all create a soundtrack for our lives with specific genres or maybe even songs. Hearing “Have You Forgotten” by the Red House Painters, for example, my memory always goes back to the fall of 2006. This is when I was dating the woman who would become my wife. I still equate the soft melody of Mark Kozalek’s voice with the feelings I had then, and I find myself thrown back to the smells, the sounds, and the images of the leaves changing colors.

When I rediscovered “Purple Haze” by Jimi Hendrix a few years back, it resurrected a somewhat dormant passion for playing the guitar. Following the revelation that I cannot play “Purple Haze” like Jimi played “Purple Haze,” I was left with a rekindled fire to learn and explore new songs.

Then there’s Strange Days by the Doors. I can relate to Cameron Crowe here. In Crowe's semi-autobiographical film Almost Famous, the main character’s fascination with rock and roll ignites the first time he hears Tommy, by The Who. I had the same reaction when I heard that organ intro in Strange Days. As a 12-year-old boy looking at the album cover, I couldn’t imagine it was worth listening to. I can still see curiosity killing the cat today though. I was in my father’s music room, and I put the CD into his stereo. If you could draw what happened, it was like an explosion of color on a barren landscape. That album sparked my fascination with 60’s and 70’s rock that continues to this day. If I put on any music from that era, I find myself transported. I can feel the tension over the Vietnam War, even though it ended 12 years before I was born.
Music can invoke different feelings in everyone. In movies, the music sometimes plays as integral a role in telling the story as the dialogue. Not everyone knows the story of Jaws, but I would bet a dollar most people know the main theme. I would argue the same thing for Star Wars and maybe even Indiana Jones. John Williams scored all three films.

Like every piece of music, this essay is a story. It’s my musical upbringing. Everyone has one whether they realize it or not. To close, I challenge you to think back to a point of your life and to remember a song from just that moment. I also challenge you to step out of your musical comfort zone. Go to any source of music and listen to something you’ve never heard to before. Try different eras of music, and listen to different genres. Try going out on the town and listening to local musicians. Most importantly, appreciate the impact of music on your life, and theirs. Appreciate what they’re trying to say. Just listen.
Header art by T. Guzzio. Photo via the author.

Despite his full time gig as a Staff Sergeant in the United States Air Force, Paul Borst still finds time to pretend to be a rock star. Having served previously as a singer-songwriter/guitar poseur in the Shacks, of Albuquerque, New Mexico, and as songwriter/bass legend in The Standards of Saranac Lake/Tupper Lake, New York, Paul now bides his time as a solo performer in the acoustic mold. He currently resides in Albuquerque, still working as a full time nylon compression specialist (parachute rigger).  He can be reached via Twitter (@riggerlovin), Instagram (paulborst7) or email (paulborst7@gmail.com).