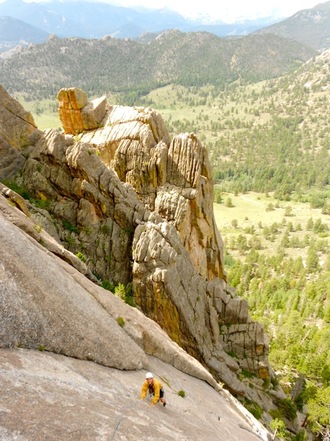 Photo courtesy of the author.
I grew up thinking I didn't like sports, a belief which seemed reinforced at every turn. I have never significantly contributed to a manly conversation about last night's game. I don't know stats. Haven't followed a draft. Never fielded a fantasy team of any sort. Am confused by brackets (particularly since I busily avoid March Madness altogether). I never played team sports much beyond a few years of little league, some pee-wee soccer, and a humiliating season of junior high basketball for which I had no right being in the gym, let alone on the court itself.

In my junior year of high school I began to develop the view that like the Bread and Circuses of the declining Roman Republic, designed to distract the populace from the state of the State by keeping everyone happy with food, drink, and spectacle; contemporary professional sports and its emphasis on over-indulging in tailgate food and intoxicating beverages distract the populace from the state of our State. Simply put, people in general know more about their beloved professional sports figures and teams than they do about the Bill of Rights, the Constitution, and the mechanics of democracy.

I am not suggesting that the American political machinery created the NBA and NFL. Interest in the specific activities themselves, and capitalism of course, created a market for all professional sports. Though like the ancient plebeians amused into obedience by the Bread and Circuses of 140 BC, in 2015 we see a citizenry unenthused about engaging in civic duty (anyone happy about about getting a jury summons?) and disengaged from democracy, as reflected in poor voter turnout in most local, state and national elections. Yet routinely stadiums around the country sell out to feverishly motivated masses of sports fans who can, in many instances, articulate every nuance of the game. I have been amused and offended (mostly offended) by the priority our culture has given to professional sports. We make players heroes and multi-millionaires while ignoring homelessness and hunger; violence against women, children and people of color; a climate crisis; and rampant warfare (to identify just a few items of note more worthy of our collective attention than, say, the Home Run Derby).

While I still believe in the Bread and Circuses theory of distraction, a funny thing happened to me about ten years ago.

I am a school teacher, and after a decade in the classroom teaching English I was about to transfer into the gym where I would be teaching physical education. During that transition I thought it odd that I was about to begin teaching a subject that has historically been associated with sports. As it turns out, the physical education standards don't mention one word about any sport specific activity. Gym (as I prefer to call it) is about learning things like social skills, personal responsibility, and how to be physically fit; not about learning the rules or skill sets of specific sports. That's for coaches to impart to those particular kids interested in a given sport. Gym, however, is for everybody! Still, as the switch drew near, I began experiencing a degree of self-doubt, wondering how good or bad I would be as "the gym teacher." Then, quite unsolicited, a close friend said, "Man, you're perfect for that job!"

This struck me as an odd statement. My buddy was a sports-a-holic, and he knew I didn't share his passion for the ice, court, diamond, or gridiron. I asked him to clarify, noting how out of the loop I felt regarding sports. He said to me, "You do it all! You run, hike, cycle, backpack, rock climb, canyoneer, mountaineer, canoe and kayak, ski, ice climb... all that stuff!"

He was right. I did do all those things, and had been for all of my adult life. I had about fifteen pairs of sport-specific shoes in my closet to prove it. I realized there and then I actually did like sports. With no disrespect to my friend, all he really did was sit around at home or in sports bars and watch other people involved in the action, whereas I was actively engaged in sports. And, in many ways, I was consumed by them. Sports drew me to remote, wild landscapes sometimes thousands of miles away.

Now, a decade after my great enlightenment, when asked whether or not I like sports I answer by saying, "I don't like professional sports," which usually leads to, "Well, what sports do you like?" opening the door to a conversation about canyons, rivers, rock, and ice.
Header image by T. Guzzio. Original photo by the author.

Christopher Mattera, Ed.D. has been descending and photographing technical canyons on the Colorado Plateau for twenty-five years. His photography appears in Moab Canyoneering: Exploring Technical Canyons Around Moab﻿,﻿ the ﻿newest ﻿guide book to technical canyoneering on the Colorado Plateau, recently published by Sharp End Publications. In addition he is an educator, and writer. Contact Chris at chrismattera@hotmail.com.

At Prodigal's Chair, thoughtful, honest interaction with our readers is important to our site's success. That's why we use Disqus as our comment / moderation system. Yes, you will need to login to leave a comment - with either your existing Facebook, Twitter, or Google+ account - or you can create your own free Disqus account. We do this for a couple of reasons: 1) to discourage trolling, and 2) to discourage spamming. Please note that Disqus will never post anything to your social network accounts unless you authorize it to do so. Finally, if you prefer you can always email comments directly to us by clicking ﻿here﻿.