cecily pollard
The Basílica i Temple Expiatori de la Sagrada Família, or, la Sagrada Família as it is most often called, is the unfinished masterpiece by Catalán architect Antoni Gaudí (1852–1926). In 1883 Gaudí took over the project after a year’s worth of work had been completed on a more traditional Gothic revival style church in the burgeoning Eixample district of Barcelona. In Gaudí’s hands the building plans underwent a dramatic shift from the traditional to the modern, still keeping with its gothic origins but finding a more expressive way to move forward into the modern era.

Like a Gothic basilica, it was to have five naves separated by columns, a transept, an apse and an ambulatory. Gaudí also envisioned eighteen soaring towers of varying heights (one for each of the twelve apostles, four evangelists, the Virgin, and—the tallest of all—Christ). He liberally applied symbolism within the undulating organic shapes of nature, which, to the pious Gaudí, were perfect: “The straight line belongs to men, the curved one to God.”

As the basilica went up, it became clear to the people of Barcelona that they had never seen anything like it.
When Gaudí was killed by a street trolley in 1926, he had spent most of his career on la Sagrada Família, completing only a fraction of it. Dwindling resources, changing architectural plans, the looming Spanish Civil War and subsequent unrest in Spain slowed the project down. Today, it is only half complete. Gaudí must have known that his magnum opus would never be realized. What kind of man devotes his entire life to a project that may never be finished?

As an architect, Gaudí was a brave and determined innovator.

As a man of God, Gaudí surely was a devotee of the concept of the mysteries of faith. Faith defies our limited ability to understand, to reason. God is, Himself, a mystery that we will never fully grasp. Perhaps Gaudí’s faith built this church, because it makes no sense—it’s impossible to understand. Yet it is beautiful, it feels safe, and it is full of mystery.

As I wander around inside the building, dreamlike structures and magnificent light permeate the stained glass and create a magical sensation: am I inside a ravine? am I underwater? am I in a wooded forest? or am I on the inside of a magical, ribbed creature as it rhythmically breathes in and out? Yes, I am. Even unfinished, it is an amazing accomplishment, one clearly borne out of faith.

Gaudí made a marvelous leap of faith, and he asks us to leap with him. When faced with public criticism that la Sagrada Família was doomed to never be completed, Gaudí would reply:  “Don’t worry—my client isn’t in a hurry.”
Header art by T. Guzzio. Original photo by the author. 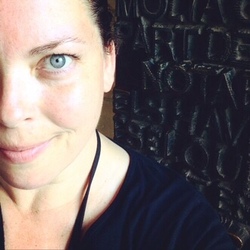 Cecily Pollard is a recovering Italophile of British descent, with training in photography and a degree in Art History. She became enchanted with Barcelona while on her honeymoon in 2014. You can find her on Twitter @CecilyPollard.