THE WEDDING SINGER: OR NOTES ON BEING A GENERAL BUSINESS MUSICIAN

RAY NOVACK
I’ve been a musician for over 45 years. I helped create my first rock band in 8th grade and we performed songs like “Light My Fire” by the Doors (yes, on accordion). I soon realized that being a rock and roll star was out of my reach. By the time I was in high school, I thankfully discovered a style of music called General Business, or GB.

GB is the moniker for wedding and function bands. As a group whose success hinged on playing to the client's taste, "generally" every genre was our "business." I quickly discovered the challenges and joys of playing varied styles of music. 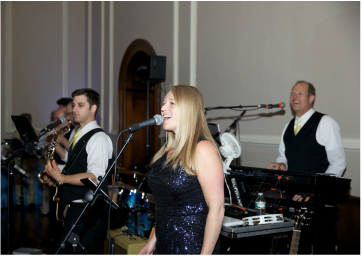 The author at work, far right, with his daughter Kelly Novack-Laurenzano, center. Photo by Louise Michaud.
In 1973 I formed my band called Horizon. By 1975, the accordion was mercifully retired. I bought an electric piano and organ, and soon the functions were rolling in. We ended up developing a club sound, but rarely played clubs. We were a much sought after unit through the late 70s, 80s and into the 90s.

Performing at weddings is definitely the most rewarding – and most stressful of gigs – for GB musicians. A wedding is an event that everyone in attendance will remember for a lifetime, and the wedding band becomes the soundtrack for that day. Well thought out set lists, playing special requests, coordinating with the other vendors, the right personnel, all need to come together for a perfect function.

In the early days of Horizon, our drummer brought in a tape to rehearsal of a song by KC And The Sunshine Band called “Get Down Tonight.” After listening to it for the first time, I said “Disco? Disco stinks!” (The “Disco Sucks” anthem not yet being in vogue).

Against my wishes, we learned the tune. I have probably played that song over 1,000 times. There should be some sort of rule that when a musician reaches a certain amount of plays, an internal bomb goes off and puts us out of our misery. Other tunes I'd add to this list:
Little did I know the staying power of some of these songs, and boy was I wrong about Disco. And what do you think I was playing to a packed dance floor last weekend? “Do a little dance...make a little love...Get Down Tonight!” (BOOM) I do put my heart into it, because that’s what GB musicians do.
Despite providing the soundtrack for many milestones and celebrations, the life of a GB musician is not without its share of drama. Once a mother of the bride fell down backwards during the Hully Gully and broke both of her wrists. Also, at one of our earliest gigs we were caught in the middle of an all-out brawl. All it took was a woman dancing with the wrong guy, and before we knew it fist, furniture, and Chinese food started flying! I still have music that has Chinese food stains on it.

Horizon has changed personnel many times over the years, and I am now the last man standing from the original members of my band. With the emergence of the DJ, and more competition in the GB field, Horizon plays fewer weddings a year, but we play clubs, outside concerts and benefits.

Some of the members of my current band, now called Horizon & The Horns, are past students of mine from Beverly (MA) High School, and one of those students is my own daughter, Kelly. I couldn’t be prouder of her and the rest of the group, learning the GB ropes.

So, after 40 plus years of playing functions, and well over 1,000 weddings, I recently took on the role of father of the bride. Kelly got married to her childhood sweetheart in 2015, and I was involved in the choice of our wedding band. Being on the other side was an eye-opener.

Now, as I approach the age of 60, I can now see the other side of the hill, and hope that Horizon & The Horns continues in some capacity when I finally decide to hang it up. I always said I’ll continue playing gigs until it is not fun anymore. After 44 years, it is still a lot of fun!
Header art by T. Guzzio. Photo via the author.

Ray Novack of Beverly, MA, leads the Horizon and the Horns band. He worked in the Beverly public schools’ music department 35 years, retiring in 2012. In addition to gracing the floor for the traditional father-daughter dance to the Nat & Natalie Cole duet "Unforgettable," Ray had the pleasure of performing a few songs with Kelly and the rest of Horizon & the Horns at her wedding. Keep up with the band's performance schedule here.