PAUL BORST
Picture this: you’re at a Yankees game, watching them play the Red Sox. David Ortiz gets beaned in the shoulder, takes his base, and the game continues on. An inning later, Alex Rodriguez is hit by a pitch. He stares down the pitcher for a moment, then takes his base. Nothing unusual, except this time, the umpire issues warnings to both benches to end the shenanigans. That’s all well and good, but why didn’t he issue warnings after Ortiz got plunked? This is a huge rivalry, and tempers are sure to flare after a star player gets hit!

Welcome to the unwritten rules of baseball. In the above example, you probably witnessed two unwritten rules at the same time without even knowing it. The first invisible rule deals with retaliation.  If you plunk my hitter, I’ll plunk yours.  It probably won’t be a fastball, but it’ll happen. The second rule is something you see every beaned batter follow, and probably never noticed: don’t rub the spot where you were hit. It's baseball’s version of don’t let them see you cry.

Baseball is an old game. Its origins are debated, but the traditional mythos has Abner Doubleday creating the game in 1839 in Cooperstown, NY. With the game being that old, it’s expected to have some traditions that aren't codified and yet are upheld and followed. These unwritten rules are seemingly designed to ensure the integrity of America's Pastime. A lot of them are well known among fans, but there’s a few that even the most die hard fans aren’t even aware of. Some of them are fairly straightforward, while others are extremely confusing and almost contradictory.

Baseball analyst and reporter Tim Kurkjian recalls how many years ago, a player named Wayne Gross hit a home run off of a reliever Ed Farmer. Gross took his time around the bases. Farmer was furious because, in his eyes, this kid was disrespecting the pitcher and the game by showboating. Four years later, Farmer hit Gross in the back with a 90 mph fastball. This is retaliation, but there was one problem. Now, they were teammates, and the plunk took place during batting practice.

“What was that for?!” Screamed Gross.

“That was for four years ago!” Responded Farmer.

Gross clearly understood what he did, and why retaliation was necessary. That’s why, somehow, these unwritten rules work. Most players know them, and it allows the game to govern itself, in a way. Where this gets contradictory is when double standards are involved.  If one of these young phenoms paying today, say for instance Kris Bryant of the Cubs, takes a little too long to admire a home run, he can expect a little chin music. However, if an older veteran, such as David Ortiz of the Boston Red Sox, walks around the bases, no one will say or do anything. That’s because in the eyes of those ubiquitous unwritten rules, Mr. Ortiz has earned that right (however, the young guy batting after him should be nervous when he steps up to the plate).

There’s even a rule about where you're supposed to walk. If you’re out at first, and your dugout is along the third base line, the quickest way back is across the pitchers mound. But watch a guy next time this happens. He walks around the mound, lest he get beaned; or, at the very least, berated on the field for being so disrespectful. That mound belongs to the pitcher and the pitcher only. He spent time getting that sand how he likes it, and heaven help you if you mess it up because you couldn’t walk around. In another example, when a player walks up to a batters’ box on the other side from his on deck circle, he walks behind the umpire and catcher because it’s disrespectful for him to walk between them. 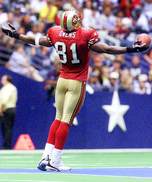 Photo: Associated Press
These rules do have their purpose. They keep the focus on the game itself by ensuring that focus is on the play, not the players. A few years ago, football touchdown celebrations were getting out of hand. Players were signing footballs with sharpies they hid in their socks, and making calls from cell phones hidden in the goal post padding. In one infamous example, during a 41-24 victory over the Dallas Cowboys Terrell Owens of the San Fransisco 49ers twice celebrated touchdowns by running to the center of the field at Texas Stadium so he could stand on the Cowboys' logo. Because of this kind of grandstanding and the tension it created, the NFL stepped in and came up with rules to limit these kinds of celebrations. You don’t need this sort of governance in baseball; the game governs itself. If a player tried to pull a cell phone out on a home run trot, he wouldn’t make it to second base before the opposing team was on him.
There are rules for what individuals can do in a game, and there are also rules for how teams should play. If you’re up by a bunch of runs, don’t steal, it’s disrespectful. If pitcher has a perfect game or a no hitter going, don’t drop down a bunt for a hit. It’s rude; play him straight up and earn that first hit. Don’t steal third with two outs, it’s unnecessary, and just serves to pad your stats. Don’t help the opposition make a play. This last one seems obvious, but at the same time, if you see the opposing first basemen going head over heels into your dugout chasing down a fly ball, common courtesy can sometimes take over, so you to catch the guy and lower him gently to the ground. Now he caught the ball and got your guy out, whereas if you let him slam into the ground, he might not have made the play. Don’t help him. Pitchers need to stay in the dugout after being pulled from the game. It shows a me-first attitude and disrespect to your teammates if you leave. By staying, regardless of how horribly you pitched, you're showing your teammates that you still have their back. Play for a win on the road, and play for the tie at home. If you’re at home and you go for the win, but end up failing miserably (say by trying to move a winning run to third with a steal only to end up getting him tagged out), then any momentum you had is killed by the negative reaction from your home crowd. On the other hand, if you tie you’ve given your home fans more bang for their buck via the gift of some extra baseball.

Today a lot of these rules aren’t being carried on by younger guys, for whatever reason. It’s not unusual to see a young player flip a bat on a home run and have no retaliation later. Sometimes this is because umpires try to keep the control of the game in their hands in order to stave off future conflict. There's also increasing pressure to protect players from serious injury, as today's pitchers are stronger and throw harder.

Still, you can be certain that many aspects of baseball's unwritten code of conduct will continue into the future, even though many of these rules can be as confusing as the English language, and twice as contradictory (i before e, except after c, unless it’s one of those weird words). Hopefully, you'll be able to spot these rules in action next time you watch a game (but, please, for the love of whoever you call your deity, don’t talk about a no-hitter during the no-hitter!).
Header art by T. Guzzio. Original photo by K. Bedell.

Paul Borst remembers baseball as his first love. He’s been playing since he was 6 years old. Unfortunately for him, he wasn’t that good and needed to find another way to earn money. The seeds of love for the game were sown, though, and he still studies baseball to this day. He’s been a lifelong Mets fan, even though their last World Series title came exactly one week before he was born (he’s crossing his fingers for this year, hoping this doesn’t turn into 1999, 2000, 2006, 2007, or 2008 when they gave him hope, only to disappoint him). Paul currently lives in Columbus, Georgia, working in the Air Force. He can be reached via Twitter (@riggerlovin), Instagram (paulborst7) or email (paulborst7@gmail.com).